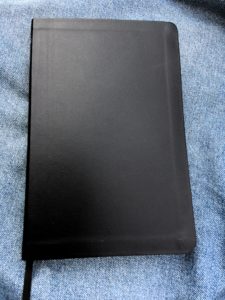 I’ve had an interest in the New Revised Standard Version for a while now* but I hadn’t managed to get a hold of one that quite suits my fancy. The translation just doesn’t have the sales figures to justify a plethora of purchase options.

My initial NRSV was large print and contained the Apocrypha (both features I liked) but is just a little too large to comfortably hold in one’s lap. My second attempt to get into the translation resulted in the purchase of a used large-print pew Bible but, upon closer examination, it has the syllables separated by bullets. I assume this feature is for ease of pronunciation but it’s just distracting when attempting to sit and read a passage.

I noticed that a couple of teachers I admire, Tim Mackie and Pete Enns, both use the NRSV or at least reference it in some of their lectures. That prompted me to cast about for a more usable version of the translation. After a modicum of searching, I found this thinline NRSV online.

It isn’t perfect for my needs and preferences since I would rather have large print (middle age isn’t for the faint hearted) and the smooth bonded leather cover is just ugly, IMHO, especially when compared to the nice cover on the CSB ultrathin. 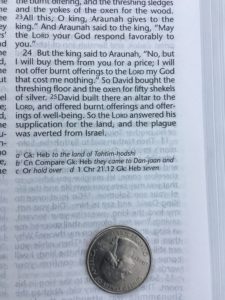 But the content inside that homely cover is quite interesting. The translation committee wasn’t afraid to admit that there can be more than one meaning for a given passage based on which manuscript you use, so there is a legend in the front of the book listing various sources. There’s also a well written preface by noted textual critic Bruce Metzgar which explains the history and tradition of the NRSV.

I’ve used the NRSV for my regular semi-daily Bible reading the past two days and I happen to be in Isaiah currently. The first thing I noticed was that it isn’t afraid to use big words. The reading level is supposedly 11th grade but it felt collegiate-level to me. (Give me a break, I graduated NSU.) The second thing that became apparent was that this translation doesn’t give you any help in figuring out what a passage means when the original text didn’t spell it out.

For example, the NRSV translates Isaiah 23:4 as “Be ashamed, O Sidon, for the sea has spoken, the fortress of the sea, saying: “I have neither labored nor given birth, I have neither reared young men nor brought up young women.” And I couldn’t figure out what was meant by “fortress of the sea” so I consulted the NLT which said, “But now you are put to shame, city of Sidon, for Tyre, the fortress of the sea says, …” I don’t know enough about ancient geography to tie this stuff together on my own but I’m glad other folks have figured it out and shared their knowledge.

In a similar vein, Isaiah 33 is plugging along talking to the people of Israel about restoration when, all of a sudden, the NRSV hits you with verse 23: “Your rigging hangs loose; it cannot hold the mast firm in its place, or keep the sail spread out. Then prey and spoil in abundance will be divided; even the lame will fall to plundering.” Wait, what?

The NLT renders verse 23 quite differently: “The enemies’ sails hang loose on broken masts with useless tackle. Their treasure will be divided by the people of God. Even the lame will take their share!” Okay then.

The NET Bible, not to be outdone, splits the difference between the two in rendering the verse with notes as follows – “The first half of the verse is addressed to Judah and contrasts the nation’s present weakness with its future prosperity. Judah is compared to a ship that is incapable of sailing.” I’m starting to get the idea scholars may not have reached consensus on what this verse actually means.

It’s easy to understand why the NRSV is a favorite among many scholars and professorial types if the rest of it is like what I’ve seen so far in Isaiah. The translation focuses on being literal and sticking to what the original texts said rather than what they meant unless they have to deviate from that to keep things from becoming really confusing.

On the other hand, it can still be confusing for reasons like those I’ve noted above. And it doesn’t convert ancient units of measurement into their modern equivalents. This means I’m going to reach for the NLT or CSB when reading through things like measurements for the first temple. I just can’t handle wading through all that verbiage and seeing “cubits” time and time again. That makes it even easier for me to skim the passage and get even less out of it than I otherwise might.

So, the NRSV isn’t everyone’s cup of soup but I like it. You have to contend with its translations of Genesis 1:2 and Isaiah 7:14 but the verbiage most of us are accustomed to is present in the notes. It’s a good translation that probably deserves more popularity than it currently enjoys. I suspect I’ll be using it for a while.

*My ideal Bible translation would be done by a group of scholars who respect the text enough not to put a specific theological tilt to it one way or another.