The rich rules over the poor, And the borrower becomes the lender’s slave. – Proverbs 22:7, NASB 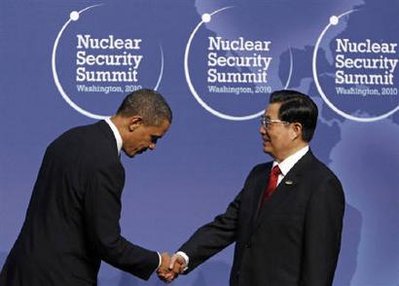 Obama’s selection as winner of the Nobel Peace Prize is a farce on a number of levels. Much has been made of this already, so I’ll keep my observations brief.

How can a man held up as an icon of peace for the world to emulate have time to meet with homosexual rights groups and not the Dalai Lama?

One reason is that China owns Obama by virtue of owning several hundred billion dollars of U.S. debt. Another reason is that leftists tend to promote peace by avoiding military action by any means necessary, most often capitulation to the aggressors. They also seem to think that the American arsenal and the American military is the source of most of the world’s pain and suffering. Obama buys into this line of thought, seeking to promote peace by removing the means for free people and countries (including America) to offer any resistance to their oppressors.

What do you expect from a guy who dislikes using the term “victory” as it pertains to armed conflict?